Sandra Kohler’s poetry has been appearing in print for at least 35 years, in publications such as The New Republic, Prairie Schooner, The Gettysburg Review and The Colorado Review. Her most recent book, Improbable Music, was published by Word Tech Communications in 2011. A previous book, The Ceremonies of Longing (University of Pittsburgh Press, 2003) won the AWP Award Series in Poetry. In 1985 and 1990, she was the recipient of an Individual Artist Fellowship in Poetry awarded by the Pennsylvania Council on the Arts. In between writing poetry and raising her son, she taught literature and writing everywhere from elementary school to college.

Waking, I hear a bird beating at the window
under the mulberry: black bird, black window,
black tree. It’s grey and thick and breathless,
but dry. I’ll walk, my husband will play tennis.
We will do what we do, enact the day our
calendar disposes. A flash of wings: a blue jay
in the mulberry. These days wings moving
through the garden’s green are usually gold –
gold finch, orioles? My husband walks down
to the garage, carrying the chair he rests in
between sets. We rub and fray a little, we rub
and caress. A dove is cooing somewhere close.
The garden waits. Is it dry enough to weed
the cutting bed? It feels as if summer is over.
It feels as if I am testing a new way of being,
some weight I’m learning to carry, restraints
I am learning to wear. The garments of old
women, the thickness around the waist,
deepening folds of the face, loosening skin.
A different grip on the real, the world, new
expectations. Do I believe a word of this?
A cardinal flies out of the mulberry, across
the roof next door. I imagine and don’t
see his red reflection in the roof pond.

END_OF_DOCUMENT_TOKEN_TO_BE_REPLACED 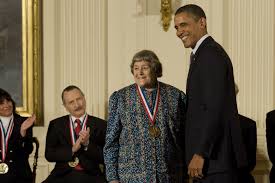 Earlier this week, the New York Times ran an obituary for Yvonne Brill, a celebrated rocket scientist (and, no, unfortunately, she didn’t get her undergrad degree in the hallowed halls of MHC, but rather, in her native Canada, the University of Manitoba) which began like this:

She made a mean beef stroganoff, followed her husband from job to job and took eight years off from work to raise three children. ‘The world’s best mom,’ her son Matthew said.

I watched the feminine uprising take off on Facebook and Twitter. Would the revered NYT ever begin an obituary of a celebrated male rocket scientist by starting with his cooking skills? It reminded me of the time Hillary Clinton, well, wait, I’ll show you:

The New York Times has since changed Yvonne Brill’s obituary in response to the criticism.

I know it’s sometimes suggested as an exercise for a variety of reasons to write your own obituary (maybe goal-setting, clarifying your values, etc.) Once, I wrote a character’s biography in an attempt to create and understand her back story better. But, I don’t want to write my obituary today. I want to share with you the ending of Mary Oliver’s poem, “When Death Comes,” because it says what I hope for.

When it’s over, I want to say: all my life

I was a bride married to amazement.

I was the bridegroom, taking the world into my arms.

When it’s over I don’t want to wonder

if I have made of my life something particular, and real.

I don’t want to find myself sighing and frightened,

or full of argument.

I don’t want to end up simply having visited this world.

Certainly, Yvonne Brill was more than a visitor. She was clearly a tremendous mother and that is absolutely important — it’s clear she thought so. But, would the New York Times ever discuss a father’s cooking and parenting skills when his obituary is in the Times for an entirely different reason? No. Hopefully, the New York Times learned something in this incident.

Barbara Goldberg graduated Phi Beta Kappa in Philosophy from Mount Holyoke College. She went on for an MA from Yeshiva University, MEd from Columbia University; and an MFA from American University. She has authored four prize-winning books of poetry, including The Royal Baker’s Daughter, recipient of the Felix Pollak Poetry Prize. Her most recent book is Scorched by the Sun, poems translated from the Hebrew by the Israeli poet Moshe Dor. Goldberg and Dor translated and edited three anthologies of contemporary Israeli poetry, including After the First Rain: Israeli Poems on War and Peace. The recipient of two fellowships from the National Endowment for the Arts as well as awards in fiction and speechwriting, Goldberg’s work appears widely, including American Poetry Review, Best American Poetry and the Paris Review. Currently she is Visiting Writer at American University’s MFA program.